Franklin Pierce's son died in a train accident between the time Pierce was elected a sworn into office. Ironically the Pierces were on their way to a funeral when this tragic accident occured.
Pierce's wife Jane was emotionally devastated by Bennie's death and would spend time writing tearful letters to her dead son while she lived in the White House.

Pierce was injured during the Mexican War because of his horse panicing. The horse rubbed him up against his pommel and Pierce passed out! 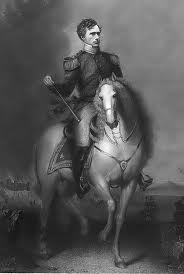 Pierce had two main nicknames: Handsome Frank, due to his looks and Young Hickory of the Granite Hills due to his New Hampshire heritage and strong support of Andrew Jackson (aka...Old Hickory.)